I came across a Harvard Business Review article the other day that struck me. It said, in a nutshell, that in order to successfully sell a truly innovative product, you have to do more than present data points and articulate a clear value proposition. You have to sell an entirely new idea.

To illustrate the point, the article’s author explained the concept with an analogy. In Vienna during the 1840’s, a physician by the name of Dr. Ignaz Semmelweis discovered that death rates for a certain fever fell tenfold when doctors washed their hands before treating patients. He brought these astonishing findings to colleagues but was completely dismissed.

Why? Because at that time, disease wasn’t seen as a result of germs but rather as an imbalance of the “four humors” of Hippocratic medicine - namely blood, phlegm and yellow and black bile. Which meant Dr. Semmelweis’s handwashing observation was simply seen as unrelated to the deaths, regardless of the data.

It wasn’t until decades later, the HBR article continued, when it was proven that germs, rather than humours, caused disease, that handwashing was finally understood and adopted as standard practice. Once the mental model around what caused disease shifted, the previously-ignored solution suddenly fell into place.

As I was reading this article, I realized that the practice of immigration law is undergoing a similar fundamental shift. In an age of self-driving cars and reusable rockets, technology more broadly has far outpaced its application in the immigration sector. Innovative solutions have popped up, but the sector has largely ignored them in favor of more or less the status quo.

But things are changing. What was once seen as acceptable, common practice is now being challenged and indeed rejected in some instances. And where is this change coming from? The clients. Or, in other words, the “end users.”

Indeed, the mental model of the immigration systems’ end users is in the process of shifting. They’re beginning to realize the power of technology - that if they can call a cab with the click of a button and book a 5-star apartment across the world with their smartphone, they ought to have that same level of service from their immigration providers.

And they’re starting to push for change.

Earlier this month I attended AILA’s first-ever immigration technology summit. One of the panels during the summit was a presentation by executives at three of the largest immigration case management companies, Tracker, INSZoom and LawLogix, and as well as a relative newcomer, PrimaFacie.

Invariably, all of them used some variation of the term “client experience” throughout the hour-long panel. LawLogix, for example, noted that they’re putting considerable effort into their client-facing portal as they’ve realized that their end users - their law firm clients’ clients - are asking for a better user experience.

PrimaFacie talked at length about chatbots and how they enable their law firm clients to more easily and naturally capture immigration data from HR teams and beneficiaries. This ended up prompting a whole discussion about the efficacy and viability of chatbots more generally within the immigration tech space.

Ultimately, the message was clear. The country’s leading immigration tech platforms were shaping their product roadmaps based on the desires, and demands, of their end users. Not the immigration law firms that are their actual, paying clients, but their clients’ clients - corporate HR teams, in-house immigration specialists, and beneficiaries.

Think about this for a moment from an innovation standpoint.

And fine, legal tech has historically been slow to adapt (though that’s actually changing), but this feedback delay puts immigration tech far behind the curve.

This made me take a step back and ask a more fundamental question: is the immigration law service broken altogether?

Is the immigration law model broken?

I’ve actually been thinking about this for a while, but I couldn’t quite put my finger on my frustration with the immigration law service model. At least not until a conversation I had just this week with a fellow immigration tech nerd.

I was explaining how perplexed I am about why so law firms refuse to post LCA notices on behalf of their clients. After all, I left my immigration law career to build a build an immigration tech startup that streamlines electronic LCA posting and electronic public access file management - what I wish I had when I was a practicing immigration lawyer.

So why do they refuse? I realized it’s because the current practice for most law firms is to initiate the LCA, attach the LCA PDF to an email, send it to their clients with posting instructions, and wipe their hands clean of the process. And when it comes to PAFs, the lawyers send a second email with instructions on how to create a public access file, maybe with a few template docs. In other words, the lawyers are MAKING THEIR CLIENTS DO THE WORK!

It was during this recent conversation that the absurdity of this reality became clear. H-1B employers are hiring immigration lawyers, often paying thousands of dollars, to put together H-1B petitions, yet they’re doing part of the work themselves.

Isn’t that what the lawyers are paid to do?

Which means that It’s now possible, and easier than ever, to post electronic LCAs and create and manage electronic PAFs! In my view, law firms should be jumping on the opportunity to provide this value-add to their clients.

If they don’t want to, that’s fine too. Maybe HR personnel want to continue posting LCAs themselves. In that case, law firms can at least notify their clients that there are better, more efficient ways of doing it. It’s the least they can do in my opinion.

I know this is just one example that I happen to be passionate about, but I think it’s illustrative of the immigration service model more broadly, and speaks to the lack of innovation. law firms react to client requests and frustrations. Clients only reach out to law firms with requests as they see technology innovations in other areas - tax filing, online banking, hotel booking, etc. - they want the same from their immigration provider.

So what can immigration practitioners do to stay ahead of the curve?

User feedback and the 11-star experience.

Immigration practice needs to realize how important true innovation is. Reacting to client requests isn’t innovation. Instead, the practice must be truly proactive. Immigration law firms must sit down with clients ask them, as strange as this sounds, what they wish for.

Here’s what I mean.

He then asked them what a 6-star experience would look like. They replied: being let in, shown around the apartment and handed a welcome gift. And so he went, all the way up to 11-stars. What would that look like? Something insane and totally impossible. Like being greeted at the airport by Elon Musk, who would then take them to space.

The point of the thought experiment was this: ascertain a 5-star experience, which is usually very possible, understand a wildly impossible 11-star experience, and then find a sweet spot somewhere in between that would push Airbnb in the right direction. Today, Airbnb is valued somewhere around $35 billion.

Immigration practice should be the same.

Immigration law firms need to talk to their clients and understand what they wish they had if money and time didn’t matter. Immigration tech companies should do the same with their law firm clients.

This is exactly what I did when I decided I to build LaborLess. I heard from clients that the LCA posting and PAF management process was frustrating. I also hated doing it myself. I asked around and heard similar things from other law firms and in-house immigration specialists. Everyone wished there was an easy, automated way of posting LCAs.

I then investigated the immigration tech landscape and found no existing solution. To me, this was a clear market gap, and an opportunity to bring create a better experience for immigration lawyers and their clients.

So let’s change our mental model.

To the immigration law firms. The fact that immigration tech startups are slowly popping us is a blessing, not a curse. Engage us. Tell us what you wish existed and get comfortable with an iterative model of implementation. We’ll build it for you, but one step at a time.

To the HR teams, in-house immigration specialists and other law firm clients. Demand more from your immigration law firms and the immigration tech companies that support them. Ultimately, YOU are the end user in many ways. Push boundaries, but also remember that immigration law has restrictions and lawyers are, first and foremost, here to ensure your legal status rather than to take risks on your behalf. So find the right balance between the two.

In the end, we’re all in it together. And if we collaborate rather than fight, we’ll all be better off.

Early this week I was having one of those exciting, inspiring conversations about immigration technology with a colleague from SHRM. We spoke about current events, recent VC funding rounds for 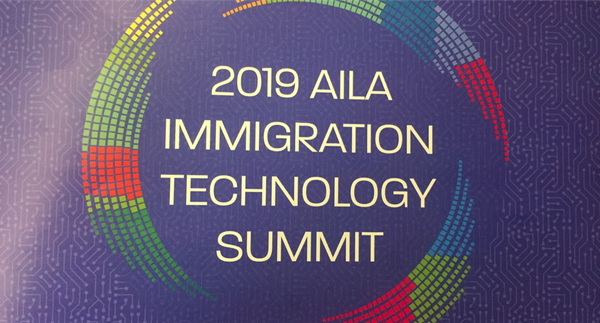 The title sounds like the beginning of a mediocre joke an old-timey lawyer might tell at a firm happy hour. But in fact, this is basically what happened for the